Beauty company Coty is breaking out — in a good way.

The stock added more than 2% to begin the week after the beauty brand took a majority stake in Kylie Jenner’s cosmetics company in a deal worth $600 million. Those gains add to a major gain for shares, climbing more than 80% so far this year.

Matt Maley, equity strategist at Miller Tabak, says the stock could be a risky bet with a worthy reward.

“This is a stock that until this year had been getting clobbered,” Maley said on CNBC’s “Trading Nation” on Monday. “It was down for four straight years, down well over 60%, and the rally has only just recently broken above that multiyear trend line. If it can take it a little bit further and break above $13.60, that will follow that upward break of the trend line with a very nice higher high and will confirm that its long-term trend has broken to the upside.” 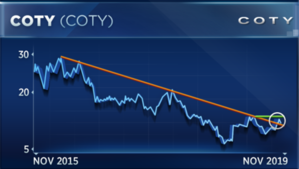 “A little bit more risk but more reward because whenever you buy any stock in the early stages of a change in trend, it always gives you a little more upside potential,” Maley said.

The Coty-Kylie Jenner deal could be the beginning of a new trend for consumer-facing stocks, says John Petrides, portfolio manager at Tocqueville Asset Management.

“Here’s a company that’s willing to pay for the eyeballs and the followers that Kylie Jenner has more so than anything else. So, this could be a new paradigm for the consumer staples, packaged goods industry which, you know, has been suffering because of weak mall traffic and the rise of e-commerce because shelf space has basically become infinite,” Petrides said during the same segment.

Coty acquired a 51% ownership position in Jenner’s beauty and cosmetics portfolio, a deal announced at the beginning of the week. Jenner still has a partnership with Ulta Beauty to sell her products in its stores. That relationship began last November and led to several quarters of revenue growth for Ulta.

“I would expect more acquisitions like this going forward because it could be the new model for companies to acquire top-line growth by partnering up with key influencers,” Petrides said.