Reality star Kim Kardashian risked a serious wardrobe malfunction, donning a vintage Thierry Mugler gown to the Hollywood Beauty Awards. The dress, from designer Mugler’s summer 1998 collection, covered little more than her nipples and sternum as she rocked some serious cutouts on the bodice.

Kim Kardashian admits she “cried all the way home” after being compared to Mrs. Doubtfire at the Met Gala.

The reality star famously wore a floral-print gown to the 2013 ceremony while pregnant with daughter North, now 6.

And she admits the negative feedback left her down in the dumps.

She told Vogue: “I think Robin Williams even tweeted it, said I looked like Mrs. Doubtfire. 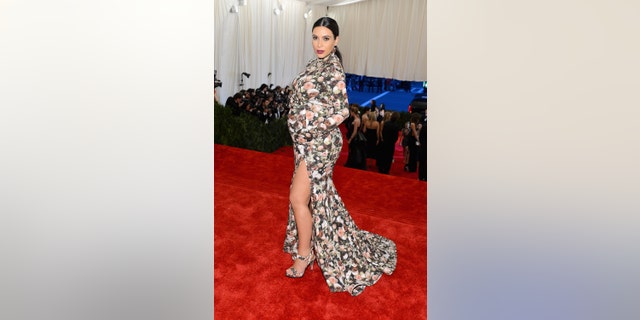 Kim Kardashian attends the Costume Institute Gala for the “PUNK: Chaos to Couture” exhibition at the Metropolitan Museum of Art on May 6, 2013 in New York City.
(Larry Busacca/Getty Images)

“I was crying the whole way home because I just couldn’t believe it.”

She added: “I was very pregnant, very puffy and bloated and I was like, ‘Oh god, of course the first time I go I’m gonna be huge!

“Kanye [West] was performing so I wasn’t actually invited, I was just Kanye’s plus one. And that was okay with me because I never really dreamed I would be at the Met Ball.

“I know no one really probably wanted me there at the time.”

Kim says she actually wanted to wear a black version of the dress, but Givenchy designer Riccardo Tisci — who was also dressing West — persuaded her against it.

She said: “We chose a really stretchy fabric because I would be growing and we wanted to make sure that alterations were easy and it was comfortable.

“I was like, ‘I think I should just do the black version,’ and Riccardo was like, ‘No, c’mon, we have to do the floral’.

“Riccardo said afterwards, ‘What do you give a woman who is pregnant? You send her flowers.’

“I could never really speak up at that point because I so shy and just wanted to make everybody happy!”

However, she admits she did have two stars who approved of her outfit – Mary-Kate and Ashley Olsen: “I just remember the Olsen twins came up to me and loved my outfit and my gloves, so none of the critics mattered because the Olsen twins approve!”

This story originally appeared in The Sun.