Married singer Justin Timberlake was caught holding hands and getting extremely cozy at a New Orleans bar with his co-star Alisha Wainwright on Thursday.

The 38-year-old pop singer stars with the 30-year-old actress in the upcoming football drama Palmer.

Timberlake, who’s currently married to Jessica Biel, 37, appeared to be missing his wedding ring in photos posted by The Sun.

A source insists to DailyMail.com that the pair were ‘out with a group of people from [the Palmer] production. There was nothing going on.’

Shocking: Justin Timberlake, 38, was seen holding hands and getting extremely cozy at a New Orleans bar with his co-star Alisha Wainwright, 30 (R) on Thursday

DailyMail.com has reached out to Timberlake’s representatives for comment.

The two actors were spotted together at the The Absinthe House, a popular spot on the legendary Bourbon Street.

Justin and Alisha were photographed from a small balcony overlooking the street.

The pop star was seated at a table and was working on another drink while Alisha could be seen cozying up to him.

‘At one stage he grabbed her hand and rested it on his knee. She then gently started stroking his leg,’ said a witness.

‘Then he clutched her hand with both of his and was playing with her hands.’ 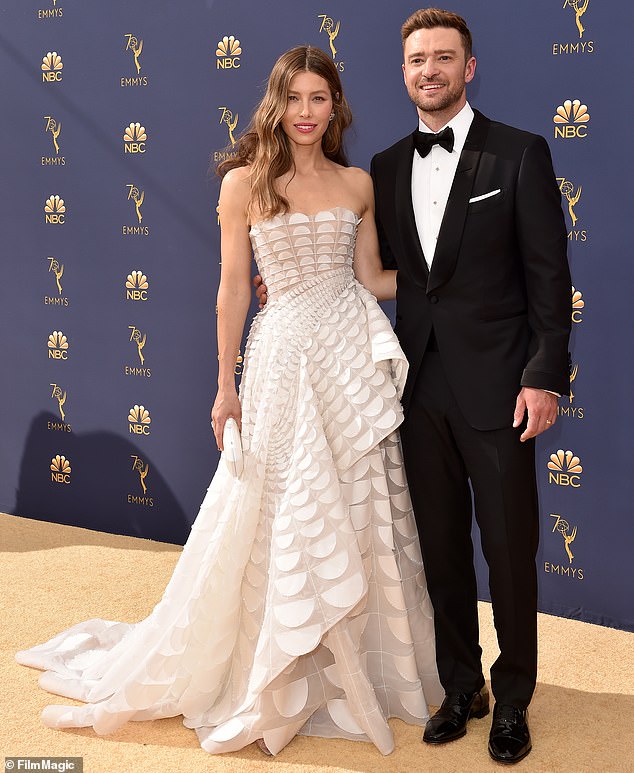 Domestic life: Justin is currently married to actress Jessica Biel, 37. The couple started dating in 2007 and were married in 2012; pictured together in 2018 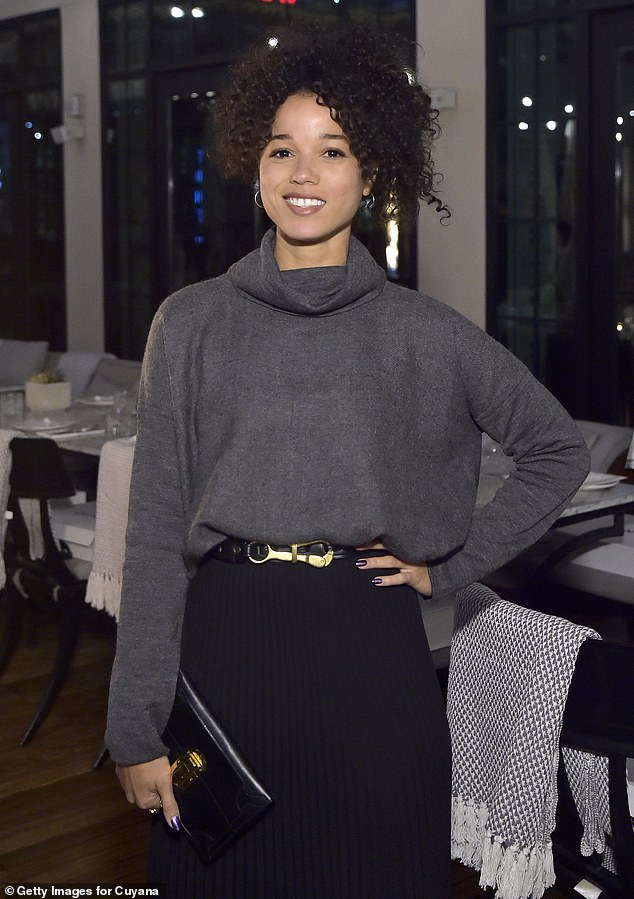 Rising star: Alisha is best known for a string of TV roles, including a major part on the Netflix series Raising Dion, though she’s now making a break into film with her Palmer role; shown October 30

The alcohol seems to have hit him hard, as he swayed and had to lean against the wall to steady himself once he rose from the table.

The two stars were seen drinking and chatting with friends around midnight and appeared to be smiling and enjoying themselves.

Justin seems to place his arm around Alisha in a video shot around the same time.

Onlookers who spoke to The Sun appeared shocked that JT would allow himself to make the affectionate display in public. 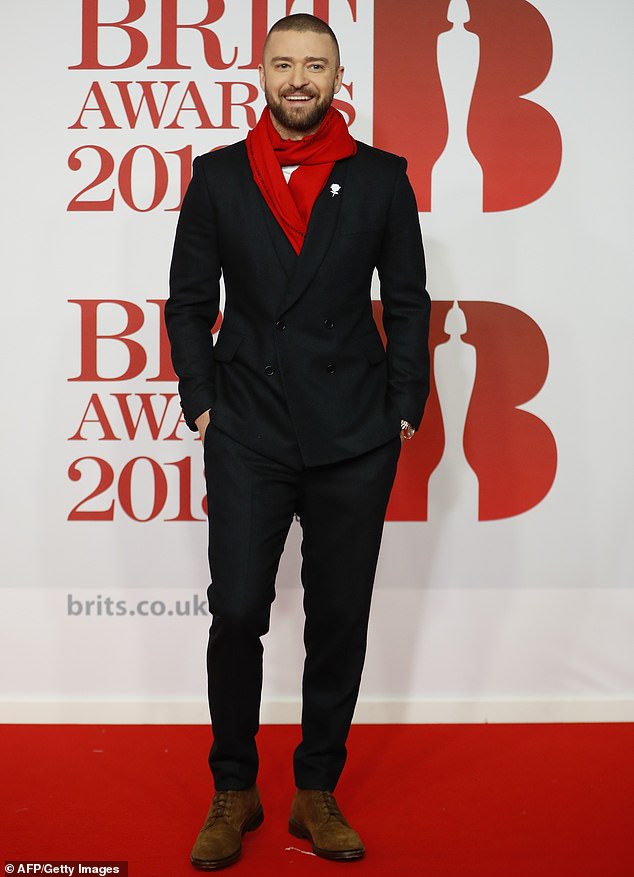 Secluded getaway: Justin and Alisha were alone on the bar balcony for 40 minutes before leaving together around 12:30 a.m.; pictured in 2018

The former NYSNC member has been married to Jessica since October 2012, and the couple dated before that starting in 2007.

It hasn’t always been smooth sailing for the two, who temporarily split in 2011 amid rumors that he had cheated on her with former The Newsroom’s Olivia Munn.

Jessica recently stirred up outrage among parents after she showed her support for the disgraced anti-vaccine activist Robert F. Kennedy Jr.

The 7th Heaven star later claimed via Instagram that she’s not against vaccines, but wants parents to have the ability to choose how they should be administer.

A rise in delayed or skipped vaccinations among school children throughout the US has increased the number and severity of outbreaks of diseases like the measles, which can be deadly but is easily and effectively prevented with vaccinations.

Justin was notably quiet during his wife’s vaccine controversy. 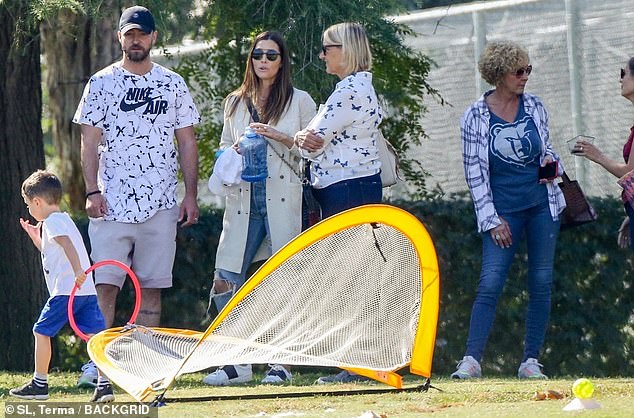 Family of three: Justin and Jessica share a four-year-old son Silas pictured here playing at the park for baseball practice with his parents and Jessica’s mom Kimberly Biel; shown October 29 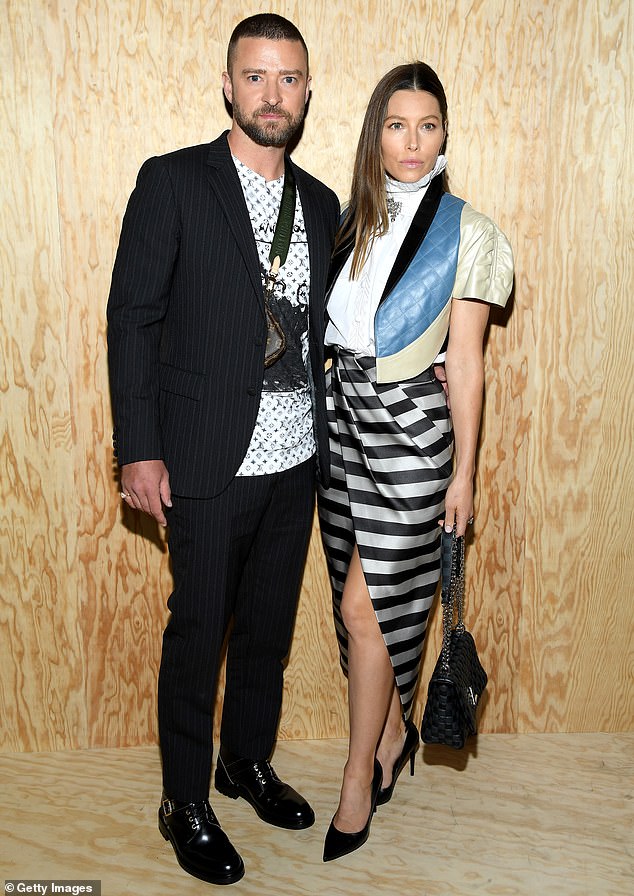 Though the SexyBack singer didn’t appear to have his wedding ring on during the evening of drinking, he’d been seen wearing it earlier in the week.

It’s possible the band may have been removed during filming, as actors have to remove their personal jewelry before doing scenes.

Justin and Alisha arrived at the ball with a group of coworkers from their film, but they were mostly alone on the balcony for approximately 40 minutes. 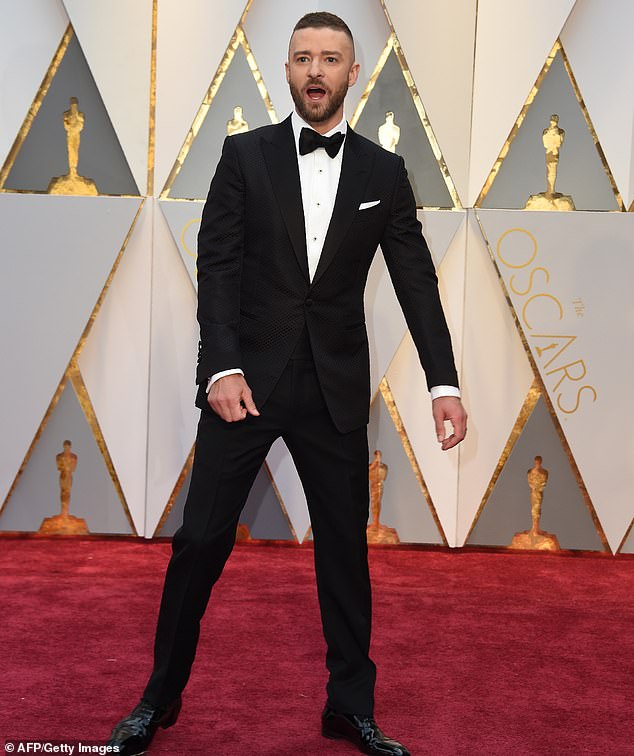 Inspirational: Justin stars as a former college football star who returns to his hometown after being in prison in his upcoming film Palmer; pictured in 2017 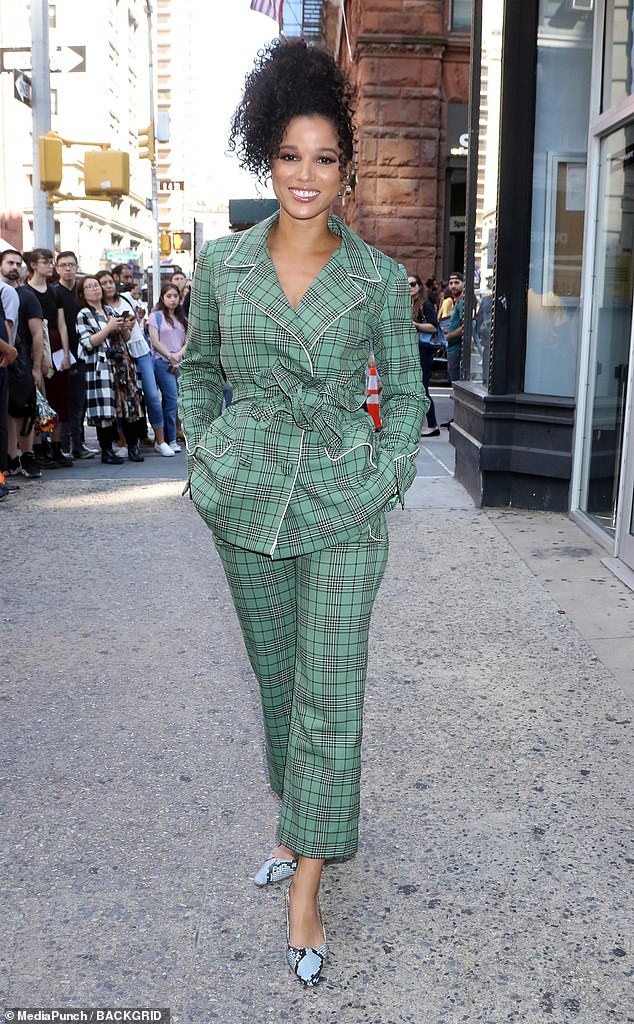 Heartwarming: As he tries to restart his life, Justin’s character is thrown a curveball when he has to take care of a young boy abandoned by his mother; Alisha stuns in a green suit on October 2

This is one of the first major film projects for Alisha, who has made a name for herself with extensive TV work.

Her most high-profile projects have been on the Freeform fantasy series Shadowhunters, as well as the Netflix series Raising Dion, on which she stars opposite Michael B. Jordan.

He plays a former college football star who has fallen on hard times and had a stint in prison. 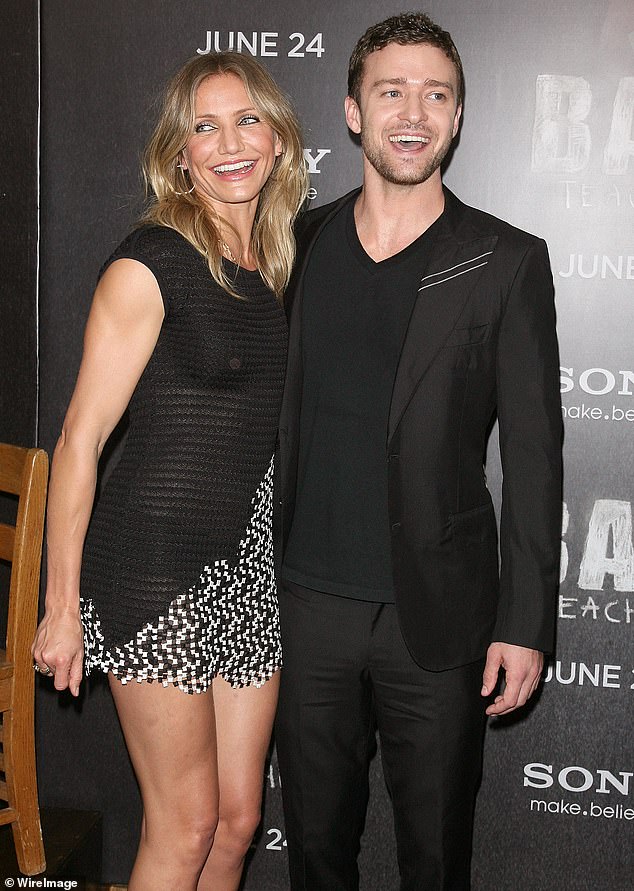 Old flame: Prior to his relationship with Jessica, Justin was attached to Vanilla Sky star Cameron Diaz. The two were together from 2003 through late 2006; shown in 2011

After being released, he returns to restart his life in his home town, but his path is complicated after he’s forced to take charge of a young boy whose mother has abandoned him.

Prior to his relationship with Jessica, Justin was attached to Vanilla Sky star Cameron Diaz.

The two were together from 2003 through late 2006, before he and Jessica began dating.

The Rock Your Body singer reportedly toned down his heavy partying ways in order to strengthen his relationship with the Sinner star.

The two have kept up a regular stream of romantic social media posts about each other throughout their relationship and marriage.

The couple married in 2012 after dating for five years and share a son, Silas, aged four 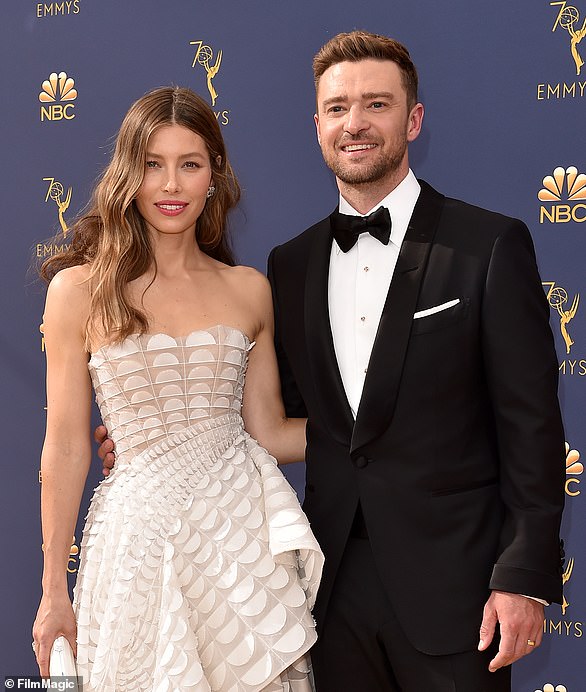 Jessica and Justin in 2018 at the Emmy awards 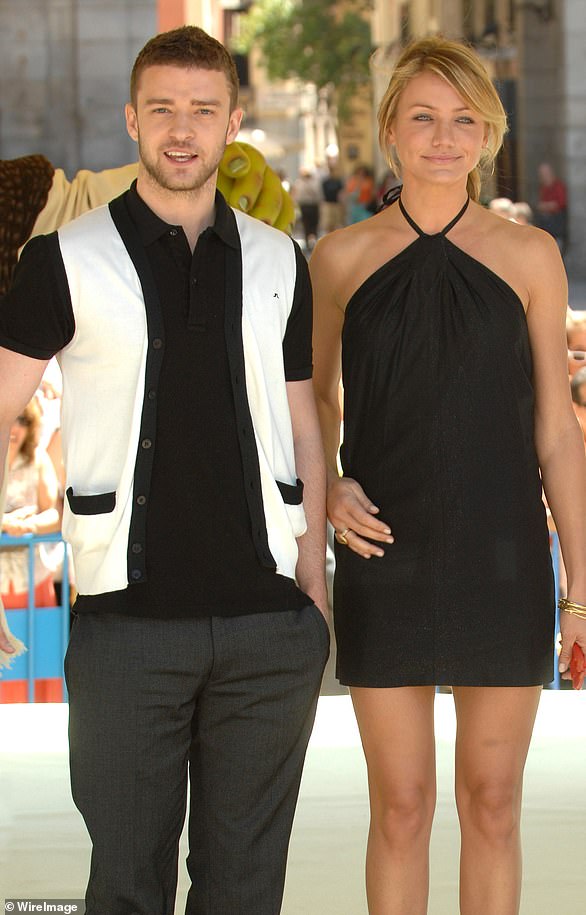 Justin and Cameron seen here in 2007

Channing Tatum’s ex has admitted she and the SexyBack singer dated in 2002, following his split from Britney Spears 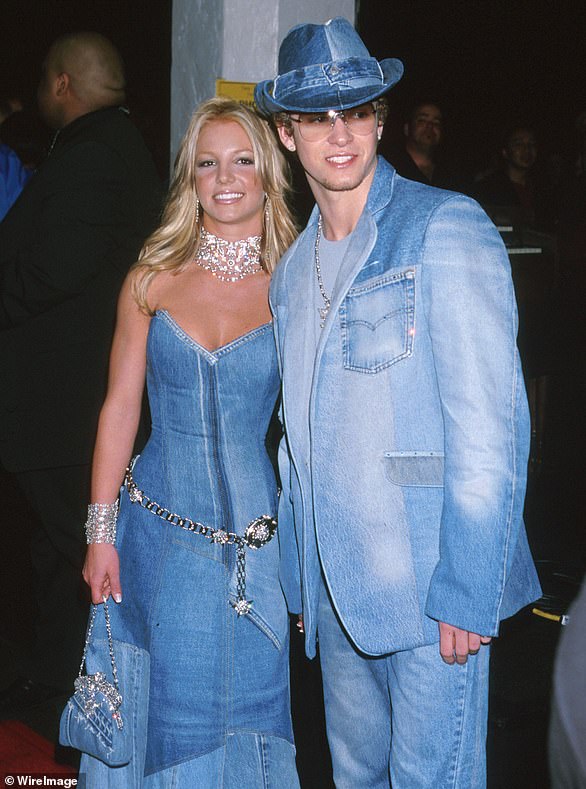 Britney and Justin at the 2001 American Music Awards

Timberlake dated the Longshot actress from 1996 to 1998

JT dated the Black Eyed Peas songstress way back in 1996, although the pop star, whose real name is Stacy Ann Ferguson, has admitted their fling wasn’t ‘all that serious’