Janet Jackson made her way out of Australia on Sunday following a disastrous final show in Brisbane where enraged fans stormed out after only two songs.

The 53-year-old R&B diva has caused quite the commotion since touching down in Australia with fans accusing her of ‘blatant lip syncing’ and ‘low energy performances’.

And on Sunday, the superstar looked anything but pleased with all the negative press as she was spotted shielding herself from paparazzi at Sydney airport. 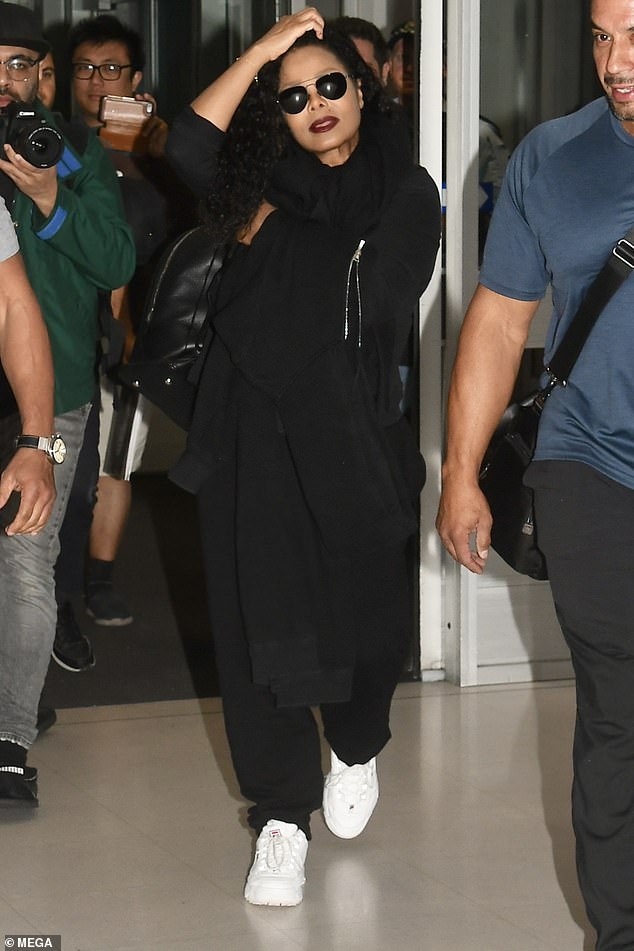 Ya nasty! Janet Jackson looked downcast on Sunday as she flew out of Australia after a disastrous stint saw fans SLAM the singer for ‘lip-syncing’ and ‘low energy performances’

Janet was spotted as she made her way through Sydney’s International airport looking downcast following her latest performance flop.

Despite criticism about her performances Janet proved she still knows how to deliver a stellar look as she oozed cool in an over-sized all black ensemble.

The music icon, who has sold over 150 million albums, looked ready to lounge on her flight to Auckland as she rocked track pants and a matching black hood. 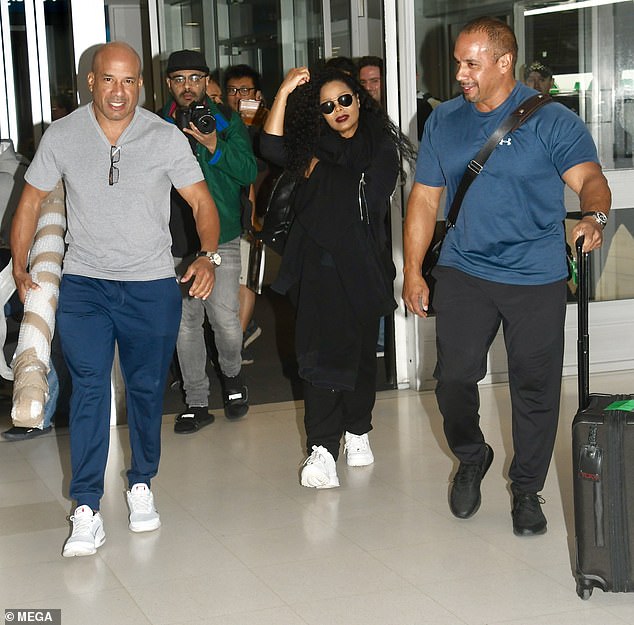 Leave me alone: Janet looked downcast as she was spotted  making her way through Sydney’s International airport on Sunday after her latest performance flop

Janet wore her long black curly hair out past her shoulders and accessorised with a pair of white Fila sneakers, a black leather backpack and a bold red lipstick.

The superstar’s time Down Nnder has been marred by accusations of ‘blatant lip syncing’ and ‘low energy performances’.

Effortless! Despite criticism surrounding her performances, Janet proved she still knows how to deliver a killer look

Furious concertgoers accused Janet of lip syncing during her performance in Brisbane. It comes a week after fans slammed Janet’s performance at the festival’s Western Australian leg in Perth on November 8.

Attendee Stuart Watson told The Sunday Mail that Janet’s set was a ‘disaster’.

‘Her sound was just terrible, she would be singing and then all of a sudden just do random stuff’, she said.

Stacey-Anne Ritchie said she had never seen so many people walk out of a concert.

Video footage shows the Together Again singer sounding pitch perfect despite jumping around on stage, leaving many fans pointing out ‘obvious lip syncing’.

And while many blasted the sound quality – or the lack thereof – not everyone agreed with the harsh opinions. 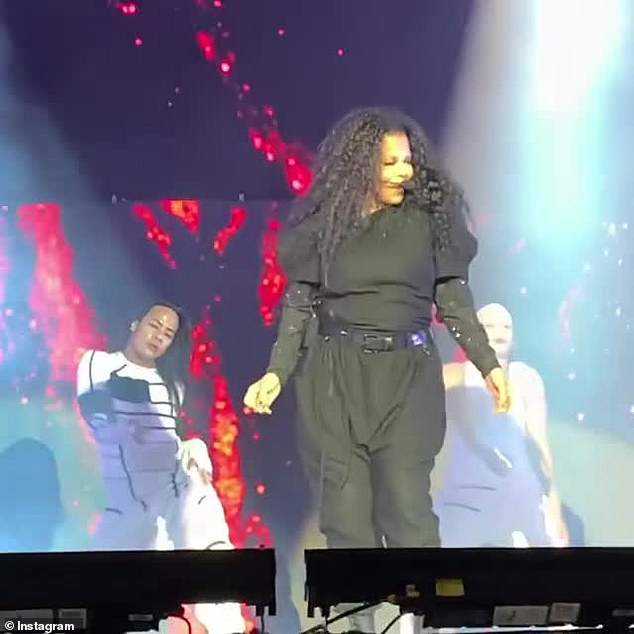 Controversial: Music fans have slammed the RNB Fridays Live event after fans walked out of Janet Jackson’s performance and accused her of lip syncing. Pictured at Brisbane show

‘I cant believe all of the people bagging the artists,’ wrote one woman.

‘I can’t fault them and as for Janet Jackson I think we need to remember she’s not 20-something anymore and with her choreography singing would be hard.’

Following Janet’s performance in Perth last week Pamela Lewis, 34, said she was disappointed with the show. 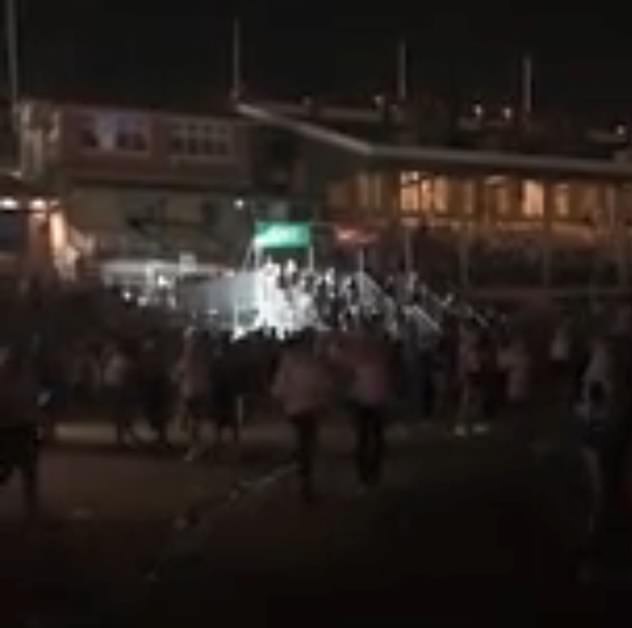 ‘It was the worst performance of the night and probably the worst I’ve seen,’ Ms Lewis said.

‘Once [Janet] was on stage she started lip syncing and it was so obvious she was dancing around trying to move the mic over her lips so we couldn’t see and she kept putting her hair over her face.’

‘Everyone started leaving and everyone was saying how disappointing it was.’

Some suggested Jackson’s microphone might have been off making it look like she was lip syncing. Ms Lewis disagreed and said the star’s timing was all wrong.

‘She was out of time for sure. We left when she tried to sing Together Again.’

Cherie Mathews said Jackson’s mouth didn’t match the screen and hundreds of people left during the Melbourne show on Saturday.

‘I looked at my sister and said “what the f***?”‘ she said.’People on level two and three were chanting for the Black Eyed Peas to come back on while Janet Jackson was playing.’

Other furious fans commented on the Facebook event page with the same complaint. ‘Janet Jackson’s performance was shameful… Sorry to say but she should be axed,’ said a Perth audience member. 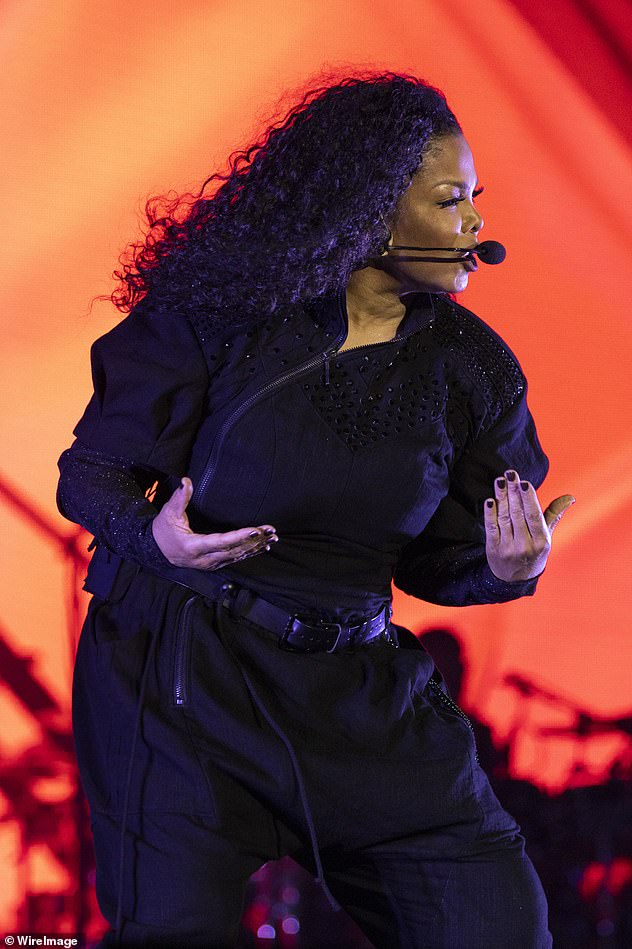 One audience member said Janet Jackson’s performance was the worst she’s ever seen. Pictured in Perth