Everything is bigger in Texas — and that includes a rare near-mint condition copy of the first-ever Marvel Comics comic book.

The Marvel Comics No. 1, which was from 1939, sold on Thursday at an auction in Dallas for a staggering $1.26 million, according to Heritage Auctions.

The issue features the first appearances of characters such as the Human Torch, Ka-Zar, Angel and the Sub-Mariner. 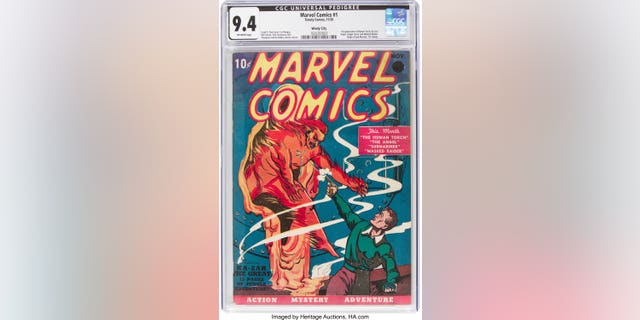 Heritage said the comic book was first purchased at a newsstand by a Uniontown, Penn., mail carrier, who made a practice of buying the first issue of comic books and magazines. Jaster said that since then, the issue has only changed owners a handful of times.

Marvel Comics released its Marvel Comics 1000 issue in August, which paid homage to many of the entity’s most recognizable characters, including Iron man, the Hulk and Spider-Man. It also highlighted some of their lesser-known characters as well.

In the issue, each page was devoted to a year in Marvel’s history, with the first one recounting the creation of the Human Torch in Marvel Comics No. 1 in 1939.

Fox News’ Tyler McCarthy and The Associated Press contributed to this report.